What was supposed to be a routine final sunset in Myanmar turned into a desperate mission to save a life.

U Bein bridge near Mandalay, Myanmar is a romantic, photogenic and very crowded wooden bridge 1.2km long, stretching over the Taungthaman Lake.  That was the spot I was planning to enjoy sunset.  That was also the spot I saw her and could not leave without helping.

She was standing in the middle of the bridge with blood running down her left front leg and obviously in horrific pain.  Burmese and tourists alike walked past this beautiful dog with no regard for her wellbeing, but she stopped me in my tracks.  I didn’t care about sunset anymore.

I reached my hand to her before pouring the contents of my water bottle into my palm so she could drink, and she did drink, very desperately.

I sat down to study her wound and began to weep.  I wasn’t sure how to go about helping her.  I called her over and she limped cautiously to me.  I leant over, resting my forehead on hers as her big brown eyes pleaded for my help.
The tears ran down my face and a monk noticed my pain (not the dog’s!) so I explained we needed to get her to an animal doctor.  He would help wouldn’t he?  I mean, he’s a monk, it’s his job to be compassionate.  I explained that she was dehydrated, starving and riddled with ticks and fleas, thus her immune system couldn’t cope with the infection and she would surely die.  Even still, the monk simply commended me for my compassion and made his excuses to leave.
She maneuvered her frail little body beneath a wooden seat and attempted to get comfortable.  I sat with her, determined not to leave her side.  I cupped her head in my hands and patted her.  I think it must have been the first time she’d received unconditional love from a human.  My insides were tearing apart – I couldn’t stay here and hold her all night, that wasn’t helping. 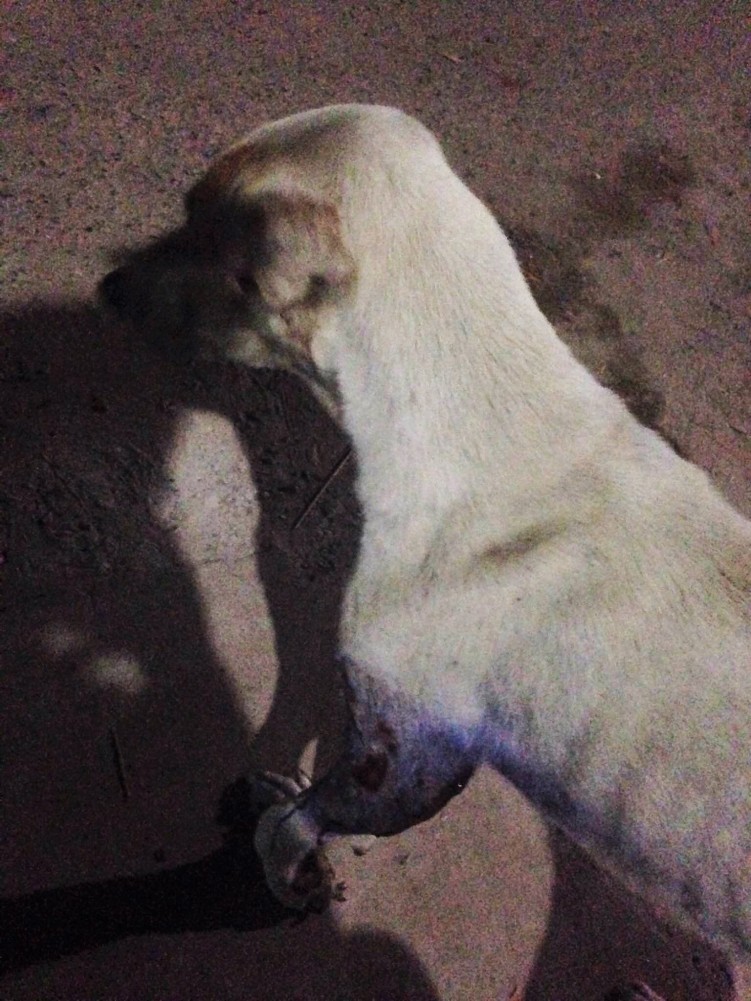 “I’m going to find you some help” I whispered as I ran back along the bridge and up the street frantically trying to locate my motorcycle-taxi driver.  I ripped my way through the crowds, running, crying, wondering what my plan actually was.
I found Joseph, my taxi driver, and after trying to calm myself enough to explain the situation he told me to get on the back of the bike and we scooted through town looking for the vet clinic.
Joseph explained the situation but the clinic seemed to be making every excuse not to assist.  I was told their was nothing we could do.
I wasn’t going to settle for that.  Joseph argued back, and eventually the vet followed us back to the bridge.  I was petrified she may have moved, but honestly, in her state, it’d have been impossible.
She was there.  She had given up.
Her weak body hardly moved as we removed her from under the seat and pumped her with antibiotics, anti-inflammatories and painkillers.  It wasn’t until the antiseptic was applied to her gaping, septic wound that she moved. 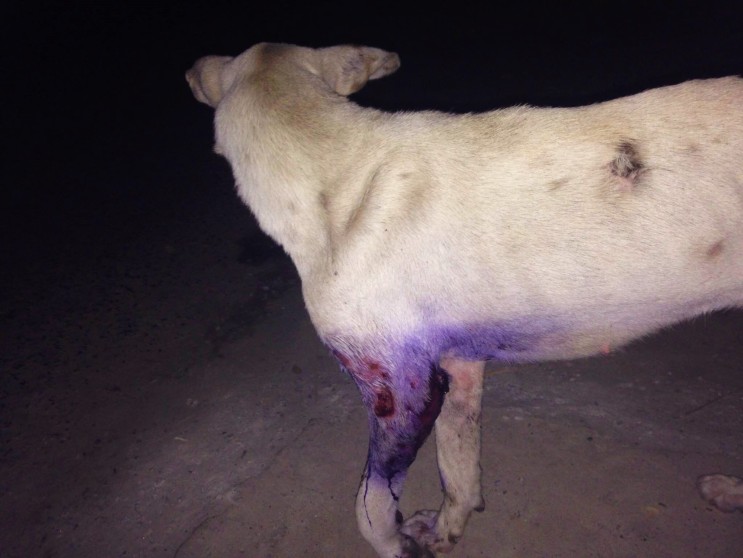 As she leapt to her feet I explained that we had to get her back to shore otherwise she’d surely starve and wouldn’t have access to water.  The two men looked at each other and turned to me saying “that’s too hard, it can’t be done.”
Frustrated, I threw my possessions into Joseph’s hand and picked up her boney body.  I walked the length of the bridge with the sick sweetheart in my tired arms with two strong men flanking me, refusing to help.  Why is it always too hard?  It’s not an acceptable excuse when an animal’s life is at stake.
At the gates of a pagoda I placed her on the ground.  She stood petrified, occasionally moving her head to look me straight in the eyes.

I was expected to pay the vet $5, but even though I had to miss out on dinner for the night, I would’ve payed him every last penny I had.  Thankfully $5 was quite literally the last note to my name.  Joseph dashed off to buy her meat, rice and water while I pulled the ticks from her skin.
Food!  Her face brightened and she nearly ran over to the plastic bag full of food.  She scoffed the meat down greedily, but wasn’t too fussed about the rice (it didn’t go to waste though because another starving boy utilized it.)

My heart broke to have to leave her there.  I wish I could have stayed in Myanmar for as long as it took to make her healthy again (and then brought her home with me!)  It pains me that I will never know if she recovers, and it pains me that such a beautiful soul is destined to a life on the street and not on the end of someone’s bed.
“Goodbye my sweet girl, you’ll be okay. I love you, get better soon.”
And she was on her own.
All I can hope is that with the medicine combination, the ticks removed, a decent meal and her thirst quenched, she can pull through and give her body a chance to fight her horrific infection.
“Saving one animal won’t change the world, but it will change the world for that one animal.”